As Canada’s population continues to grow in the years to come, potential issues related to population growth such as increased pollution, transportation difficulties and urban sprawl are likely to arise and actions must be taken to ensure that we can continue to sustain and grow our infrastructure for the generations to come. According to Clean Energy Canada, the transportation sector in Canada is the second-largest source of carbon pollution in the country, contributing roughly 24% of the country’s total greenhouse gas emissions in 2015, with vehicles using fossil fuels accounting for more than half of these pollutants. The recent global transition towards electric vehicles have helped reduce this number, with studies showing that electric vehicles and plug-in hybrids produce much lower overall emissions when compared to gas-powered vehicle, with a fully electric vehicle producing zero tailpipe emissions. As Canada moves to phase out traditional coal power in all provinces by 2030, our carbon footprint is expected to continue decreasing over time. However, the adoption of this new technology requires us to build the necessary foundation over the coming decades to support Canada’s commitment towards sustainable growth. In doing so, one of the most significant obstacles to Canada’s adoption of electric vehicles stems decidedly from its lack of a proper electric vehicle-charging infrastructure.

Public concerns that electric vehicles are unable to travel for long distances, are unfeasible in certain regions or are unreliable are among the largest barriers of entry for Canadian consumers that are highly reliant on their personal vehicles for daily use. There are approximately 5,000 public charging stations across Canada, with the vast majority of these stations clustered within Canada’s largest cities, primarily in Ontario, Quebec and British Columbia. In comparison, there are roughly 12,000 gas stations in the country — nearly one for every 3,000 Canadians. While the need for additional charging stations remains a pressing issue, a more even distribution of charging stations among urban communities is evidently more important. As seen in Figure 1, the numerous gaps and separated intervals between charging stations are often too long to allow for continuous travel via Canada’s current charging station network, even within the same province or city. In addition to building more public charging stations in Canada, the strategic placement of charging stations along key transportation corridors is important for raising the confidence of potential owners and to establish the trustworthiness of a Canada-wide charging station infrastructure that is fast, safe and reliable. A unique concern in Canada is that cold temperatures have a significant impact on the travel range of electric vehicles, particularly in the winter season, as batteries are less effective when cold, resulting in a reduction in travel range. However, Electric Mobility Canada estimates that the vast majority of trips tend to be under 80 kilometers in length, which falls within the current winter travel range of modern electric vehicles for daily use and which has continued to improve as the technology matures. 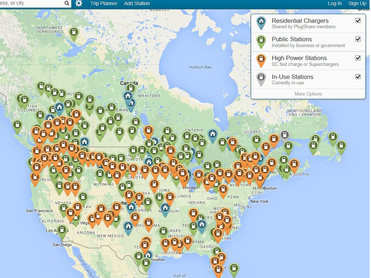 In addition to establishing the necessary charging station infrastructure, the increased usage and demand for electricity will likely require utility providers to improve upon and expand their current operations in order to sustain the burdened electrical grid, requiring additional generators, transmissions lines and transformers. Nonetheless, the success of this infrastructure depends primarily on the support of the government at all levels, ranging from establishing federal programs to municipal bylaws. A national policy towards raising public awareness, providing subsidies for potential owners and establishing funding for additional charging networks can encourage and incentivize provinces and municipalities to take part and facilitate long-range travel and convenient urban charging. Locally, individuals can install charging stations in their garage or just outside their homes and charging areas can be added to parking facilities in all new buildings to enable people to charge their cars at home and at work, facilitating greater social acceptance of the new technology. In conclusion, growing Canada’s electric vehicle charging infrastructure will require a joint effort between all levels of society but is an opportunity to build the foundation for the future that starts today.

Transportation represents more than half of all fossil fuel usage in the world, and the vehicles we choose to drive will have a significant impact on how we approach our commitment towards sustainability in the future. By eliminating the main obstacles in the way of adopting electric vehicles through the establishment of a reliable charging station network, we can help lead the way towards clean, sustainable economic growth and a more competitive Canada in the global market. This can only be done through the support and cooperation of both Canadian citizens and our government through public policy, funding and incentives, such as passing zoning bylaws to promote electric vehicle charging stations, accommodating for the increased usage of national electricity and raising awareness through education. With the necessary education and proper infrastructure in place, the road is clear towards future improvement in Canada.

Back to Scholarship Finalists