An immense population growth of approximately 22% is expected for Canada by 2050. The North-American country will be host for approximately 44 million habitants, hence developing new challenges and needs. These inconveniences can be split into two categories, human dissatisfaction and environmental sustainability. Safety, congested traffic and cost of living are the most recurrent human concerns. On the other hand, a more important consumption of energy and natural resources, followed by an increase of pollution production are the threatening environmental problems. This paper discusses the implementation of a potential solution to the aforementioned issues, namely the Autonomous Electric Bus. The presented solution is eco-friendly and saves energy, time and money by allowing people to replace conventional vehicles and benefit from a cheap safe public transportation.

Human errors and activities are the principal reasons leading to today’s high road accidents rate and global warming, respectively. Both factors are vehicle-related, whereas both their consequences are catastrophic. Fueling automobiles with petroleum gas, a non-renewable natural resource, emits greenhouse gases and pollutes the air. Moreover, their frequent usage creates an inconvenient traffic and elevated need for energy. Therefore, a population growth will increase the demand for energy and worsen the traffic and environmental problems. Singapore, amongst other countries, took the lead in adopting strategies that provide its citizens with an eco-friendly means of transportation as an alternative to automobiles. The Asian island will introduce to public usage the first fully autonomous electric bus, Volvo 7900 Electric buses, by the beginning of 2019. Similar strategies are currently adopted in Canada, being a world leader in environment protection and population’s satisfaction. This paper focuses on the future of Canadian eco-friendly transportation projects, discussing their consequences on the population and the environment.

Unlike machines, humans make mistakes. Unfortunately, human mistakes can be fatal, however generally inevitable. In fact, over 90% of car accidents are caused by human errors according to The National Motor Vehicle Crash Causation Survey of 2008. The Association For Safe International Road Travel (ASIRT) reveals that 1.3 million people die in road crashes each year, on average 3,287 deaths a day. In best case scenarios, where there are no victims or injuries, accidents still often slow down the traffic road circulation or completely stop it, making the driving experience extremely unpleasant. Enormous losses in lives, money and time are caused by these tragedies. In 2014, Amodo, a telematics insurance company, illustrated a graph showing the recurrent causes of road accidents. The results are shown below in figure 2. 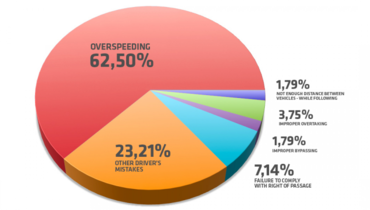 As shown in graph, almost all mistakes could have been avoided if humans were more cautious. This implies that accident-free roads are possible solely if vehicles could be driven with no human interference. Fortunately, this dream will shortly be realized as self-driving automobiles were recently introduced to the market and are quickly becoming the future of transportation. It is no surprise that the new technology is gaining people’s appreciation as in addition to offering safety, it will reduce transport fares as well due to saving drivers cost. In 2017, mini electric self-driving buses were tested in Trikala, Greece and the public reaction was very positive. Over 200 hundred commuters were asked to fill a survey regarding their experience and the results show the effectiveness and usefulness of the autonomous bus in people's everyday life. Moreover, they confirm the absence of any safety-related issues. (Portouli et al., 2017). Thus, the autonomous electric bus offers a solution to reduce the 9th leading cause of death globally, the car accidents. The suggested technology will not only save lives, but people’s time and money also.

Similar to a family that is preparing to welcome its newborn dependent along with its social and financial responsibilities, Canada is getting ready to be home of new 8 million habitants by 2050. This expected population growth is associated with necessary obligations, such as providing sufficient energy for population usage. This will be challenging as current energy sources like fossil fuels are finite and their abundance will be questionable in the near future. Add to that, they are a gigantic contribution to global warming. In fact, the universal energy demand is expected to double by 2050 and the consumption of current sources is poisoning the environment with greenhouse gases, while they are not sufficient (Eden, 1993). Fortunately, the usage of the non-renewable petroleum gas to fuel cars engines can be replaced by electricity. As for the general need for automobiles, it can be reduced by encouraging people to use public transportation instead. Canada can set the example for the world by implementing a combination of both suggested alternatives, a completely autonomous electric bus. Generally, a public transportation method operated by electricity will save significant percentage of human consumption of energy as less vehicles, regular or electric, will need to be recharged or fueled. Moreover, electricity can always be produced due to the existence of multiple ways to generate it (Liu, 2013). The most common eco-friendly methods are the generation of electricity by the kinetic energy of flowing water and wind or by solar photovoltaics and geothermal power. Ecofys, an Energy consulting firm, explains in details a plan which allows to fully satisfy the global energy demand by 2050. Its proposal is briefly shown in figure 1. 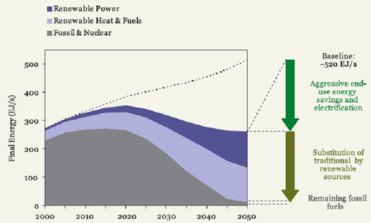 In order to achieve Ecofys’ goal, the firm had established a two-fold plan, on the one hand by reducing energy consumption, and on the other hand by finding other eco-friendly alternatives for generating electricity. The launch of the autonomous electric bus can efficiently achieve the aforementioned objectives.

This paper discusses a potential solution that can accommodate the needs and challenges associated with an expected Canadian population growth. The expected issues were split in two categories, human dissatisfaction and environmental sustainability. It is concluded that the Autonomous Electric Bus is the recommended option for the North-American country as it is an efficient way to prevent fatal road accidents. Furthermore, it is eco-friendly and affordable to the people.

Back to Scholarship Finalists